Whenever I interview/interviewed for jobs within theme park organizations, the question that always comes up is, “Why are you passionate about theme parks?” And my answer is always the same, the classic 1998 PC game RollerCoaster Tycoon. Unlike most other theme park fan bois and gyrls, my love of theme parks didn’t stem from good memories of going to theme parks as a kid and then being mad that they changed things some 20 years later. I didn’t start going to theme parks on a regular basis until I was in my early 20’s outside of going to Carowinds as a kid and dumb teenager. My passion for theme parks came from playing hundreds of hours of the greatest building simulator of all time, its superior sequel and good but not as amazing third part. 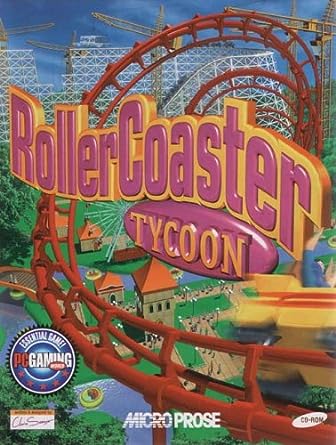 “This is the greatest video game ever created”-George Washington, maybe

The construction and management simulator video game genre, nor the amusement park sub genre of it was not pioneered by RollerCoaster Tycoon, but it did revolutionize it. The first theme park builder game was 1994’s Theme Park creates by Peter Molyneux. And it looks a lot like what would eventually become RollerCoaster Tycoon, with having everything placed on a grid like area with pathways and rides. However the game only had one mode and was limited to 30 different types of attractions. It laid the ground work for a man named Chris Sawyer to plant his support beams to his masterpiece.

Chris Sawyer would them release his first ever construction simulator game, Transport Tycoon. But it would be the mixing of other great features from other construction management games that was used in Transport Tycoon that would eventually lead to the creation of RollerCoaster Tycoon. Gameplay wise it is a easy to learn and difficult to master game style. You would be given different scenarios to accomplish in different levels that could range from having an in park attendance be at a certain point before a specific time, reach a customer satisfaction goal, make so much in revenue or a combination of those and more. The game also restricted certain rides that you could or could not use in each level. For example, you could be given a goal to reach in in park attendance for a level that was on a lake with a few islands and you were given all the water rides to use but maybe only 6 other attractions. This game had some hard levels, but beating one was worth it. My favorite part was being able to spend money on research so you could unlock more rides, but the unlock was always random. So it was fun seeing what new ride, shop or ride feature would be unlocked. Sometimes it would be something cool like, cars that spin around on a roller coaster or the 3D Dome. And you could change the color scheme on everything. But this was only the beginning.

Long before games of today that more often than not offer downloadable content and people complaining about it, the PC gaming industry had been doing it for years prior with expansion packs, and you could argue that they were better thank the current DLC trend with the amount of content you got. And RollerCoaster Tycoon was not exempt from expansion packs and being amazing. Corckscrew Follies and Loopy Landscapes were released and they upped the content and refined the gameplay. In addition to adding more rides and parks (including real world parks like Alton Towers), but also making minor changes in some things you could do, but still made a big impact. Things like giving up more color options on pathways or new themes. It was a small change, but allowed for more variety in the gameplay because you were given more options to play around with.

RollerCoaster Tycoon 2 came out in 2002 with its expansions Wacky Worlds and Time Twister released shortly after. This was a sequel which a lot of people consider to be the definitive edition of the game due to how much content they added into there with new ride types and scenarios. It kept all the great parts of the first game and added more while keeping the same easy to use layout of the first one. And yes, at the time it was the definitive edition. But we’ll get to that later.

After that, we got RollerCoaster Tycoon 3. One of the big critiques or the second game was how they did not improve on the graphics or engine from the first game. RC3 proves why the idea that better graphics make a better game is the worst possible arguement you could make as the reason a game is not good. RC3 played a little better and refined some of the mechanics from the previous two games, allowed for importing audio and image files into the game and the ability to have a first person view on all of the rides, but the switch the 3D models made the game less fun. Part of RollerCoaster Tycoon’s fun was in its charm, having very simple graphics added to it. The game felt like it had no soul. And while technically better (both literally and metaphorically) it didn’t make the same impact. There was a fourth game, RollerCoaster Tycoon: World which I never played, but I heard it is hot garbage so I’m not going to bother mentioning it outside of it being alleged hot garbage. So what’s going on with the franchise now?

It’s pretty much dead in the water. Construction simulator games are not as popular of a genre as they were in the late 90’s early 2000’s. Everyone wants to shoot people in the face as a bald white chiseled faced space marine/explorer who doesn’t remember his past and/or is running away from it. So RollerCoaster Tycoon has mostly been relegated to a mobile game that while free to play, suffers from the pitfalls of all free to play games. And while a version of it has been brought over to the Nintendo Switch (which I’m waiting on my copy of currently), that one is mostly a port of the mobile title without all the free to play nonsense which means its probably good.

But what is the best way to play RollerCoaster Tycoon? Is it the original or the sequel? And the answer is both. Back in 2017, proof that there is a God who loves us was confirmed with the release of RollerCoaster Tycoon Classic. What started as Chris Sawyer wanting to bring a port of the original two games and their expansion packs to mobile devices, it was then brought to PC and Mac as the good Lord intended. This is the definitive way to play RollerCoaster Tycoon. It has all the enhancements from RC2 and includes every level from the first two games, all the expansion pack material, a ride editor, over 100 ride types to make, 95 levels and challenges to complete and the wonderful original art style that gave both games an insane amount of charm. It gives everyone a chance to have their cake and eat it too, but remember food and beverages are not allowed on rides. So eat it before riding. Also, this game is $20 right now on Steam, less than the price of a meal at a theme park. So do yourself a favor and get this game if you haven’t already.

So that is the game series that helped in shaping me into a theme park fan boy. It is proof that inspiration can come from any place and shows just how far video games have come as a medium of influence. And it is not just me it has influenced. This game is being used at a collegiate level for classes that involve theme park management, it is that good and comprehensive. I and many others owe a lot to Chris Sawyer and the amazing series him and his development teams created for many people’s enjoyment. I know I would not be where I am today with this amazing series. So from the bottom of my heart to Chris Sawyer and anyone who worked on this game: thank you!

Theme park blog run by someone who enjoys theme parks, attractions and comedy. Thoughts and musings are that of the individual and not any company. View all posts by The Churro